Everything You Need to Know About Ear Surgery (Otoplasty)

Protruding ears are one of the most common inherited deformities in the head and neck. Although some cultures view it as a sign of good luck, most others associate it with strangeness, oddity, or feelings of anxiety.1

Protruding ears affect people in all age groups. Starting from a young age, children are often teased at school for having protruding ears.2 Having this trait can limit a teenager from being social, and may prevent them from doing normal activities like going to a party on the weekend or applying for a public job. Some people even choose specific haircuts to hide their ears. Additionally, there are many stereotypes associated with prominent ears. If you’ve noticed, old-school cartoons depict characters of less intelligence with prominent ears. The media often chooses a person with protruding ears to show an odd or “goofy” individual.

Having prominent ears diverts attention from the central face and pushes it to the ears. This can conceal other beautiful facial features that you may have, like the shape of your eyes or the delicate curve of your nose.  Fortunately, a well-trained facial plastic surgeon can address this concern, transforming the ears to look more aesthetically pleasing and shifting the focus to the rest of your face.

Otoplasty is a surgical procedure that reshapes the outer ear and corrects the protruding ear deformity. To ensure an excellent cosmetic result, the specialized surgeon must have an artistic eye, vast knowledge of anatomy, and a wealth of experience. Otoplasty involves many details and nuances that you would only want to trust a board-certified facial plastic surgeon to achieve. Patients are generally very satisfied with the cosmetic outcome because it improves their self-esteem, perception of themselves, and conveyed emotion.

Where did otoplasty start?

You aren’t the only one who has thought about it getting an otoplasty. The first evidence of outer ear reconstruction was discussed in the seventh century through the ancient scriptures of Indian Ayurvedic medicine. Since then, this procedure has been refined by Italian, British, and German surgeons attempting to produce the best, most natural cosmetic result.3

It wasn’t until the early 1900s when anatomists and surgeons began understanding the three-dimensional nature of ear reconstruction. As scientific understanding grew of the many folds of the ear, plastic surgeons began utilizing techniques addressing each one. We commonly use a technique in “classic otoplasty” that surgeons Mustardé and Furnas popularized in the 1960s.4 The otoplasty procedure has been modified over the years to be less invasive than each previous one, while retaining its effectiveness.

How do protruding ears happen?

Protruding ears have been shown to have a genetic component. The trait is usually passed down from either parent and its incidence can be up to 5 percent of the general population.5 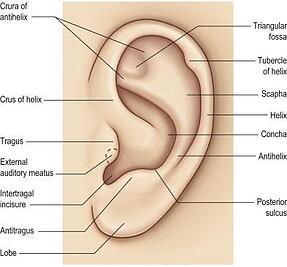 The ear begins to develop at the seventh week of life and progresses into skin and cartilage that is divided into multiple regions. The outer region, known as the “pinna,” consists of cartilage with thin skin enveloping it. It contains a series of folds on the anterior surface of the ear which has various features (see Figure 1). The inner portion of the ear that is bowl-shaped is known as the “concha.” If the concha, or conchal bowl, does not develop correctly, it creates excessive protrusion of the pinna from the head. During weeks 12-16 of fetal growth, the fold that furls the ear back towards the head (known as the “antihelix”) develops. Failure for this to develop properly results in protruding ears.

The overall three-dimensional shape of the ear allows us to process the ear as a “normal” ear. When we perform otoplasty, we are striving to recreate the ideal “normal” ear. The pinna is normally 15-20 millimeters from the outer helix to the head. This creates an angle, which we term “auriculocephalic angle,” that is normally 25-35 degrees. If the ear is greater than 40 degrees, we categorize this as abnormal.

In cases of protruding ears, the most common malformation is an absent furl in the antihelix location. Using precision and accuracy, the facial plastic surgeon artistically corrects the auriculocephalic angle by recreating the furl manually.

When is a good time to have otoplasty?

An otoplasty procedure can be performed at all ages. The growth of the ear is nearly completed at five years old.6 Therefore, performing this procedure around 5-6 years old is ideal because it will not affect healthy development of the ear. The age of five is when most children begin to notice differences in facial features and start teasing their peers.7 Children tend to heal very well from surgery and are excellent candidates for this procedure.

Teenagers are also affected by abnormal ears. It is important to have confidence and self-esteem in this crucial period because this can set the foundation for their behavior for the rest of their life. Adults have a greater depth of understanding on the effects of protruding ears. They can relate to how this has affected their life through their many experiences, and they have done their research. Therefore, it is never too early or too late to invest in a procedure that helps build the confidence you desire.

What can I expect during the otoplasty consultation?

During consultation, the first step is to understand the anatomic cause of the ear prominence. The most common areas affected are:

I always obtain a complete history because having prominent ears could be a feature of a more complex ear deformity, like a genetic syndrome. My goal with performing this surgery is to shift attention away from the ear and draw it toward the patient’s other features. Attention to detail is important here, because the surgeon must restore the ear back to a normal, soft contour. In order to achieve this, the surgeon should follow a simple, safe, consistent, and effective technique.

What are the types of otoplasty?

The type of otoplasty you might need depends on the root cause of the ear protuberance. Traditional otoplasty involves the following steps:

Some patients are good candidates for a newer, cutting-edge technique called “incisionless otoplasty.” Unlike traditional otoplasty, incisionless otoplasty results in virtually no scar. To perform this technique, the antihelical fold is marked, as well as entry points for the sutures, that will recontour the cartilage into a more ideal position. The suturing is then performed in loop fashion that allows for shaping of the ear cartilage and skin, pulling the ear back towards the scalp to the ideal auriculocephalic angle.

Patients do very well after otoplasty surgery. A large bandage is placed around your head which is designed to protect the ear and keep the skin around the ear moist. The extra gauze around each ear helps to avoid pressure on these areas. This dressing is kept in place for a few days until it is swapped for a lighter one. I recommend taking a week off school or work to ensure enough rest and a successful recovery.

Since otoplasty is not one of the most requested cosmetic procedures, a lot of surgeons don’t perform it very often and may lack proficiency. It is vital to trust a surgeon with great knowledge of ear anatomy and experience, such as a facial plastic surgeon. The ultimate goal is to help you gain back your confidence and love who you see in the mirror. Schedule your consultation today to speak with a facial plastic surgeon to learn more and find out if otoplasty is right for you.

Reach out todaySchedule Your Consultation

Contact Us
Accessibility: If you are vision-impaired or have some other impairment covered by the Americans with Disabilities Act or a similar law, and you wish to discuss potential accommodations related to using this website, please contact our Accessibility Manager at 321-727-3223.
Contact Us